Dr Michael Hall has recently joined the Diabetes Group where he will be able to share his vast knowledge and expertise to help benefit those who live with diabetes on the Isle of Wight.

Michael and his wife Ann retired to the Island three years ago, they had been frequent visitors since 1949. They met at The London Hospital in Whitechapel where Michael was a medical student and Ann a nurse. Before qualifying in medicine, he was a Junior Lecturer in Physiology. In later years, one of his research interests was diabetes. He was intrigued to learn that the room he had used in the Medical School, was the one in which JJR Macleod, co-discoverer of insulin and Nobel Prize Winner, had worked from 1899 to 1903 before moving to North America and eventually Toronto, where he was responsible for providing facilities and supervising Dr Frederick Banting and the then medical student, Charles Best in their work which eventually led to the discovery of insulin in 1921. 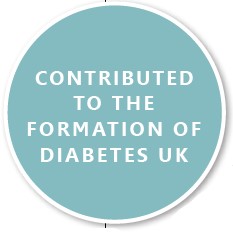 After qualifying he became a general practitioner in Forest Row, Sussex and then later in Shebbear, North Devon. He was very much involved in setting up general practice training schemes in both the South East and South West England. He held posts at the University of Sussex and later as a Senior Lecturer in the Department of General Practice, University of Exeter. Amongst his many interests were GP training (for which the Exeter Department was nationally renowned), screening for diabetic retinopathy, practice organisation and computer development in medical care. He published widely. His involvement with diabetes led to membership of the Council of the British Diabetic Association now Diabetes UK, and later their Chairman. Although no longer closely involved with Diabetes UK, he believes the charity has been of tremendous benefit to all those with diabetes and the health care professionals who serve them. 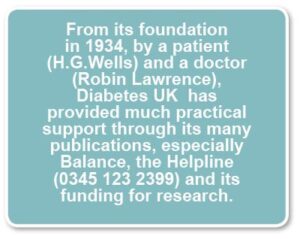 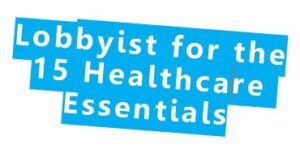 Effective lobbying of parliament has greatly raised the profile of the special needs of people with diabetes and their families and has resulted in much improved funding for health and educational diabetes services. The 15 Diabetes Healthcare Essentials, the annual review, being checks and services
to which everyone is entitled, are a good example. In 2001 he was chair of the organising committee of the annual meeting of the European Association
for the Study of Diabetes (EASD) in Glasgow, the first time this meeting attracted over 10,000 health care professionals. After this he was elected to the International Diabetes Federation- Europe (IDF) Board in 2003 and continues to serve with that body.

This led to reviewing the services for people with diabetes in European States, and the publication of the European Diabetes Policy Puzzle, now in its 4th Edition. Collecting such data greatly helped in IDF’s advocacy of diabetes in the European Parliament and the Commission and assisted in the birth of the
EU Diabetes Parliamentary Working Group. He was also involved in the development of a worldwide petition to the United Nations which eventuallyresulted in setting up World Diabetes Day – 14th November. 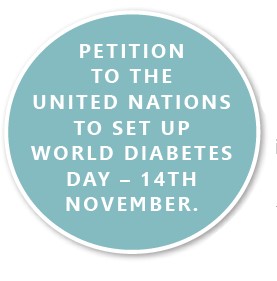 Michael says that we can learn much from seeing diabetes care in many countries and they from us. Our care here in the UK matches the best in the world. Keeping in touch with those who have diabetes and their families is vital to help people understand how they may obtain the best care and support.

To this end, he frequently participated in many meetings of diabetes member associations in Britain and in workshops around Europe. His wife, Ann, was
involved in Practice Nurse training and together they ran courses on minor surgery at the Postgraduate Medical School, Exeter University. In 2017 he was awarded the Order of Mercy for services to people with diabetes by the League of Mercy. His leisure interests have been sailing, reading, gardening, both
in Devon and at his beloved house in South- West France. He and Ann have three married sons and nine grandchildren.